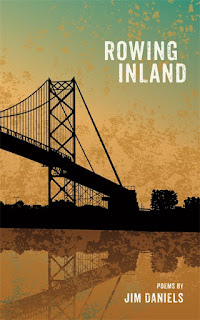 When I opened the book Rowing Inland, by Jim Daniels (Wayne State University Press, 2017) to the table of contents and saw a poem titled "Wishbone," I knew it was the book for today, following yesterday's The Wishbone Dress. And there's the first coincidence!

This is part of the Made in Michigan Writers Series, and I was eager to encounter some Pure Michigan (Yes, Michigan!--calling on various tourism slogans here...) as our family had annually spent a week together in Michigan for many summers, right up until this one, when we went to Nashville, TN (or just outside it, with redheaded woodpeckers, I am happy to report!), but this is not tourist Michigan. It is lived Michigan, with car factories, trailer parks, economic decline, smoking and drinking, streetlights (and streetlights out), and fireworks going off long past the 4th of July. The title poem and others have nostalgia in them, for lost childhood (and childhood friends), but it's a clear-eyed book, too, hard-hitting at times, with humor, light and dark.

In "Wishbone," we see the mother's windowsills with "potted violets" in tender light. "My mother dried wishbones on those sills." That happened at my house, too. "It was she who decided they were dry enough / to break. She never wished herself." My mother always gave the wishbones to her children. "If you find my father / in this picture, please let me know." Now there's a particular sadness. His father worked nonstop in the factories...and left unfinished projects in the house, went on one vacation, or went fishing (that was not fishing).

Yes, I found August: "Outside, August waits." That's in a poem with no day job. And I also found Labor Day, waiting just around the corner. And August again in that same poem, "Summer Weight, Labor Day":

Anticipation is a dog that's already
been kicked. Sad September.
If only you could go back
to school and do it right this time,
or merely better.

The poem continues with "Lawn mowers on the prowl," and that reminded me to tell my husband, after his most recent mow, that already the first yellow leaves of the sweet gum were landing. And then, in the last stanza, the word "Zoom" leapt out in its current resonance before receding into the past and fading summer:

Zoom in on you sprawled on your porch
issuing lame challenges to insects and sunshine
to linger. Over a warm beer, you dream
of the perfect cool hat that could've
changed your life.