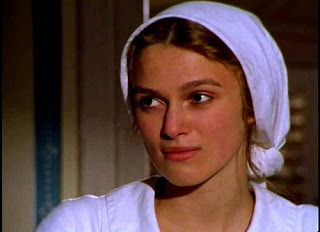 In my ongoing are-these-DVDs-damaged? project (some DVDs we inherited were subjected to rain), I watched Dr. Zhivago in two parts over the past two days.  I remembered it would be a very long movie, and I kept waiting for the scene where the writing room is covered in snow and the appearance of Julie Christie and Omar Sharif.  The actors playing young Zhivago and young Lara were doing a wonderful job, and the one playing young Lara looked amazingly like Keira Knightley.

Because, of course, she was.  I finally realized I was watching the 2002 British television version, not the film I remembered from childhood.  (Must have still been a little discombobulated from quitting my job.  I also forgot to go to my exercise class, but I blame that on the broken garage door.  Intense cold, broken coil spring, etc.)  It also explained why the destroyer of Zhivago's father and seducer of young Lara looked so much like Sam Neill.

But watching Zhivago coincided with following the news on the people's revolution in Egypt, where things continue in turmoil and where I have a college friend covering the events for the news and also posting notes at Facebook.  I worry about her safety and her spirits.  And caring about her is key to the difference between one way of looking at the world and another. 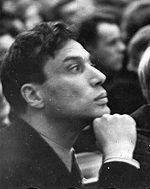 In Dr. Zhivago, the doctor cares about the individuals more than the society, knowing that this care and love is what makes life worth living and would lead, anyway, to the best kind of society.  Boris Pasternak, who wrote the book (which I read in youth after seeing the film), was criticized by his own society, for just this kind of love and way of looking at things. He was forced by the USSR to reject the Nobel Prize he was awarded after first accepting it with gratitude and awe.  Pasternak tried to figure out how to live in his world, a repressive one, and met criticism from within his country and without, because it was a hard figure.

Whether the Russian revolution, the French one, the one in Egypt, it's clear to see that those in power will never willingly give it up, and those who take power run the risk of becoming the new oppressors or the new dealers in violence.  I hope for the safety of my reporter friend, and for the safety of those attempting peaceful protests and working hard to change their country.  I hope for a transition that values life.

And Dr. Zhivago is a poet. Pasternak, too, was a poet.  The book and film show how poetry is easily, and sometimes not so easily, dismissed by the powerful and beloved by the people.  In story and in life, Zhivago and Pasternak were spared arrest or execution because of their genius and integrity.  I find that inspiring, and see how it leads to a great responsibility.

Update:  Holy Moly, Mubarek stepped down!  Yay for the persistence and patience of the people, and for their conviction, and ability to stand up for one another.  Let there be peaceful transition now.

CBS radio roundup: "Revolution in Egypt"
Posted by Kathleen at 7:46 AM

Sending you warm thoughts and thanks for being here on the web and in the world.

Well, I hope your friend in Egypt is safe. I am amaized at how this all came about. It will be interesting to see if other countries do the same in that part of the world.

Yep, and now things really get interesting. Hey, it's kind of like your life as well. What next?

Whenever I hear mention of the Sharif/Christie version of Zhivago, I have to laugh at myself. If I've said this here before, I apologize, but we went to see it in the drive-in as a family, and for some reason, I decided to attend the experience as if I were blind. I'm pretty sure that I gave up on the project at some point, but to this day, and even though I have read it since and probably seen most of it on television, I am still a bit baffled...