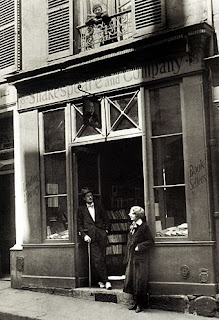 Day 359 of the "What are you reading, and why?" project, and I hope everybody in the Midwest stays home curled up with a book today, including the groundhog.  I will be curled up still with Shakespeare and Company, by Sylvia Beach, and, by random coincidence, recently came upon James Joyce's birthday in this book, which is February 2.

There they are, standing in front of the store in Paris. She writes of him so feelingly, and tells in such detail the difficulty of publishing his book Ulysses, that now I might just have to read it! I love the short stories in Dubliners but had never attempted Ulysses beyond the odd excerpts provided in odd literature anthologies. It's so long! Or, as concerns booksellers who must carry, stock, and ship it, so heavy!

Another coincidence is that Joyce had eye surgery, and I have been reading the account of poet Mark Doty's eye surgeries in his blog. Excruciating, but the good news is he can read again!

If you did not get out to the bookstore yesterday, here are some things you can read online:

--new Paul Hostovsky poetry feature at Escape Into Life
--new issue of Soundzine (click the beautiful blue image to enter), which you can also listen to!

I have a poem, "White Morning Glory," in the new Soundzine, which I was able to record with the help of my son and Audacity (a sound program you can download) (on his laptap with a good microphone) on the day the city came to trim the trees.  Somehow we got the poem recorded between power saw noises. They trimmed the very branch these Pearly Gates had entwined on their climb!

Also announcing the release of Brute Neighbors, an anthology of poetry and photographs that explore how nature and culture live side by side in the city (sometimes tree trimming). You can click around at that website to hear/see a couple of the poets in videos, and a reading is coming up in Chicago on March 7, and maybe later in April. (I have a poem in that, too.)

OK, hunker down, dearies.  And I am going to imagine the groundhog curled up with a book today, so he doesn't come out at all, and there's no risk of seeing his shadow, although, it's true, it might still take him six weeks to come out if he's reading Ulysses.
Posted by Kathleen at 8:41 AM

So far today I have gotten up seven times, showered, shaved, eaten oatmeal and talked to Kim online. Nothing has changed but the weather. Warm, cooler, cold, freaking cold, rain, sleet, now snow. I thought I was Bill Murray. Maybe I am.

I heard about the arrival of actual snow there over at Facebook.

Beautiful poem, Kathleen, and beautiful reading. It was great to hear your voice!

It is a relief that your Soundzine voice fits your photograph.

Thanks, Sandy and Collagemama! I was amazed even to accomplish the recording. So many fine things in Soundzine, and I was just listening to works in the previous issue again the other day!

The hog-rodent did not see his shadow this morning (Pennsylvania was snowed in, thank goodness). Though if it means there is not six more weeks of winter, does it mean winter is over? Tomorrow? It confuses me.

It always confuses me, too, Susan! But sometimes there is a February thaw on my birthday!!

Kathleen,
It was wonderful to hear you read your beautiful poem (I esp.liked the sound and feel of white-water-later). For readers like me, it's so perfect to have the poet read the work as it sounded to you as you wrote it.
Congratulations to you as you near the end of your 365 project! Whimsy and random coincidii are expected for any future blog. I especially love when you teach a poem - opening up the deeper meanings. More of that, please. Oh, and as far as comedy goes: puns are always welcome!

I imagine the groundhog playing a DVD of "Groundhog Day" and snickering to him or herself. But maybe a book and a glass of brandy after that.