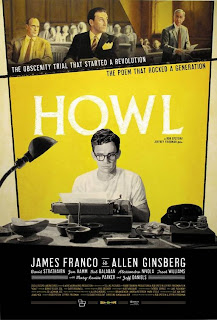 Day 363 of the "What are you reading, and why?" project, and I finished Shakespeare and Company, by Sylvia Beach, in bed last night, not at the volleyball match, where I saw someone reading the new George Bush book and someone reading an old-fashioned print newspaper. And someone right beside me reading something very tiny on a hand-held device.

I sat in a little river of libero parents.  Yes, by random coincidence, I sat next to the dad of the Blue team's libero, #41, the dad of the visiting club's libero, #10, and I am the mother of the Red team's libero, #30.  The libero is a defensive player in the back row who can come in for, not one, but two front row players, and freely (the libero part, I think), not having to be waved in by the ref.  In high-level school tournament play, there is a libero tracker to make sure all this is kosher.

All three liberos were very good, and two had been coached by my husband, as that is his special duty this season of high school age club volleyball. Hubby joined the river and sat beside me after his team (from the morning matches) was done, having won all their games, and after driving all the way home to the fine stew I'd left him in the crockpot and then all the way back for our daughter's crowning match. Her team also won.

How does this tie in with Sylvia Beach? Her last chapter is about the Liberation, after the German occupation of Paris. "Hemingway Liberates the Rue de l'Odeon" is the last titled vignette. I don't think that gives anything away. We know what happened at the end of World War II. 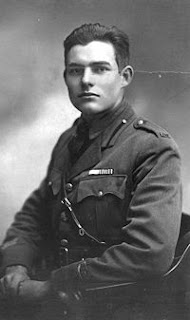 (This is a picture of Hemingway in World War I.)

The Rue de l'Odeon is the street Sylvia Beach was living/working/hiding on by the end of the book, and one day she and her friends carried all the books, furniture, and shelving up two flights of stairs to a hiding place to save it from the Germans. Ernest Hemingway, in full bloody, dirty war hero mode, came to make sure they were all right on the day the last of the German tanks were rolling out of the city. 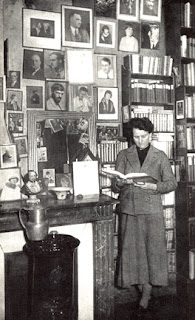 I learned lots about book biz & publishing biz in this little book, and more about James Joyce, who seems a charming, shy, lovable, quirky guy afraid of dogs and bad about keeping track of money but good about spending it. Yes, I will probably have to go ahead and read his book Ulysses, that no one would publish (except Sylvia) and that kept getting banned, confiscated, and pirated, so that neither she nor he could benefit from the demand for it. Or maybe I won't. I'm glad it's out there, and that I have the choice.

I don't really know what everyone objected to.  Obscenity?  Bad words, people having sex?  It's all around us, all the time. We do it. Oh, and you might enjoy this blog entry by Carolee Sherwood, called penis paintings on friday, vagina monologues on saturday.

At any rate, I feel free to go to the movie Howl tonight, about the poet Allen Ginsberg and his obscenity trial, instead of watching the Super Bowl.
Posted by Kathleen at 8:37 AM

First of all, congrats to your hubby and daughter for their exuberant and exhaustive victories. Your husband's trophy was your 'stew'.
Now that you've provided me with exposure to 'Howl'(went to the site, looks wonderful)I will look forward to seeing it when it arrives to 'on demand'. Nice choice to have vs Super Bowl..one ups for Allen Ginsberg.

As far as the 'penis paintings on Friday, vagina monologues on Saturday, Carolee Sherwood; Had a chance to see 'the vagina monologues' at St. Mary's College(sister college of Notre Dame, South Bend) but it was extremely controversial up here in Indiana, home of conservative hypocrisy.

Our form of entertainment here is debating what form of Bill 590 is to be enacted or considered for legislation. This bill is the exact replica of the Immigration Bill in Arizona. Fun, for the likes of me!!!!
I will have to make extra copies of my Naturalization papers, even though I'm a V-vet and have contributed to all that is 'American', because I look like the poster boy on this bill.
People here in Indiana still giggle at the mention or sight of a penis/vagina(ref: Carolee Sherwood'site) but with their heads turned in discretion.
Let us know how, 'Howl' is!
Have a good day, amigo.

You will find little to shock you in Ulysses at this late stage of the game. Nowadays, people are more put off by the density of his text, but as a poet and explicator of poetry, this shouldn't be a chore for you. The main thing to remember is that it is, in fact, fun.

Thanks, seana! Looking forward to the fun of Ulysses, and I sense there is a lot of language fun, word fun, word coinage fun!