Some things stay. Some things get away. Like mice. I love sweet cute little mice. In children's books. And mice are fine, close up, in real life. But I don't like them in houses I live in. They poop a lot in kitchen drawers. I grew up in a farmhouse, where my parents still live, every winter catching a lot of mice that run in from the fields. They keep a running tally. Last year they caught 99 mice, as I recall.

But I might not be recalling the actual total from 2010, just from a particular conversation on a certain day in 2010. I am fascinated by what happens in the nips & tucks of our whole and demented brains. 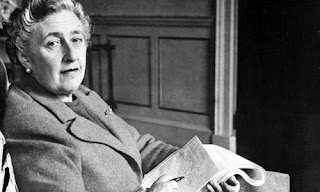 And that brings me to Agatha Christie, dementia, the fugue state, and NPR. I'm sure I heard a reference to Agatha Christie's failing memory in her later writings, and her possible defense of that in a later book, on an NPR story this past Sunday morning, probably on Radiolab. But I can't quite track it down. Paul Auster was mentioned, too. I can search these terms, but everything folds together into the other stories offered there.

So I leave you to listen to Vanishing Words and to read about the Nun Study, which have folded into my blog before. Agatha Christie really did run away from home one day in 1926, possibly in a fugue state of near amnesia, stressed out and depressed by her philandering husband.

And she really did write a mystery play called The Mousetrap, still running in London, that started out as a radio play called Three Blind Mice!

And we really did experience another mystery in our household, this one The Mystery of the Mousetrap. It's this kind of a mousetrap, the plastic recyclable kind that you can get here, at Trendy Gadget, but which we got at a local hardware store. We caught a mouse in it (sigh...moment of silence/sadness) and put it outside in the snow, where the actual dead mouse was quickly extricated and devoured in the circle of life. (This comforted my husband, whose father did keep, feed, and live with mice in the house.) The trap was left there on the ground to be cleaned later and then, yesterday, appeared on the corner of the picnic table, not placed there by a human who lives in this house, not by a Dog Named Wolf, and not by a passing garage door repairman.

Who put the mousetrap on the picnic table?  Was it a) a crow b) an owl c) a squirrel or d) Agatha Christie?
Posted by Kathleen at 7:18 AM

Oh the myseries of life. I think the butler did it.

You live in the most fascinating house!

One summer in college, I lived in an old rental house on the edge of a field. The house was called "The Mousetrap" and the residents kept a tally of slash marks inside a cupboard door to list the number of kills. I also showered with frogs and spiders that summer. I'm amazed I survived as I'm terrified of spiders and mice. (The rent was dirt cheap!)

The mouse's ex-wife? I think Agatha would go for that explanation.

I take comfort from the fact that while I don't remember as well any more, I digress much better.

I'm going to have to start giving out virtual prizes for the best comments.

Today you all win!

But no witty remarks today. Sorry.

You get the prize, too, Emily.

I can't believe this is a true story. About Ms. Christie, not about the mice :).

Is that what happened to Anne Heche that one time?!

I vaguely remember that fugue, too!

Hastens to say this holy cheese comes from Switzerland, not Wisconsin.