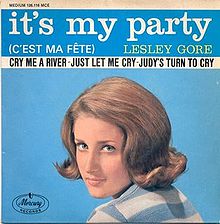 It's nice to share a birthday with 1) Ansel Adams and 2) women I know at church.  I love the photography of Ansel Adams, and I can hook elbows with the women at church when we stand there at the beginning of February for the monthly rendering of "Happy Birthday."

1) "It's My Party," sung by Lesley Gore (but read the whole story here!)
2) "You Say It's Your Birthday," sung by the Beatles (but read about Ringo Starr's 70th birthday here!)
3) "Happy Birthday, Mr. President," sung by Marilyn Monroe, with additional lyrics to "Thanks, Mr. President" here!) 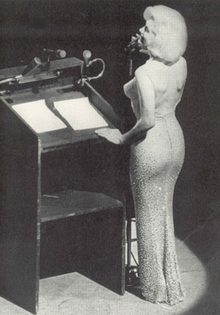 Why does it look like the sparkles are just painted on?!

So, yes, I can cry if I want to, but I think I will sing along to The Weepies and Pink Martini in the kitchen, or wiggle my hips to the soundtrack of Moulin Rouge, as I do laundry in the basement, instead. We'll see, won't we?

The somewhat vague birthday plans still include a poetry meeting (unless there's a bad thunderstorm, as my poet friend is driving over from Peoria), no cake, and probably wine instead of Wild Turkey.

But church and volleyball wolleyball are out of the picture, as the kid is driving herself today, due to midday transportation issues involving the dad-coach/tournament schedule. Hence, the singing and dancing household chores opportunity. My life is a musical comedy, and I like it that way.
Posted by Kathleen at 7:48 AM

Happy Birthday! I can give you a ride to church if you would like, just give me a call!

Happy birthday Cap'n. Give the White Album a listen.

Feliz comple anos! Might as well make this an international celebration.

When I was a kid we got a break from our daily chore list on our birthdays. (My mom had a chart and we had to rotate between doing the dishes, doing the laundry, and "picking up." There were three of us.) It always seemed like a divine intervention when one of the other siblings had to take my chores on for the day. Wish I could make that happen for you and your laundry!

i recommend some disco music as a birthday soundtrack. hope you have a great day!

Sandy and Nancy, I see a disco laundry event with sparkly prism ball lighting. I will try not to bump my head on it.

Happy Birthday! You're sandwiched right in between my sister and my nephew. Apparently it's a good time of year to get born!

This is also my lovely niece Catherine's birthday. Cat and Kath? Or something like that. Your co-natalists include (besides Ansel Adams) Sidney Poitier, Robert Altman, Anthony Stewart Head (from Buffy the Vampire Slayer), Buffy Sainte-Marie (NOT from Buffy the Vampire Slayer), wonderful director Mike Leigh, wonderful actress Brenda Blethyn, wonderful actress Imogen Stubbs (AKA Lady Nunn), Kurt Cobain, Gloria Vanderbilt, Richard Beymer (Tony in the movie West Side Story), J. Geils (of the J. Geils Band), Walter Becker (who is half of Steely Dan), and supermodel Cindy Crawford.

I do not see any unifying theme there. But they are or were mostly very cool people!