Karen Weyant (aka the Scrapper Poet) gave me the Memetastic Award, which I am to pass on to 5 other bloggers who are willing to:
1. Link back to the blogger who awarded you.
2. Display the graphic from the award creator.
3. Post five facts, four of which must be lies and
4. Pass the award to five other bloggers who should follow these rules.
I pass the award and these rules to:
--Julie Kistler, of A Follow Spot, a fantastic theatre blogger
--Hummus Anonymous, a great place to go for hummus, hilarity, and unusual holidays
--CollageMama's Itty Bitty Blog, where CollageMama makes fabulous collages and writes wonderful things and see things in the world and takes pictures and knows stuff and cares about children and old people
--Sherry O’Keefe, who knows about Montana and poetry and silence and beauty
--Confessions of Ignorance, where I always learn a lot
There are numerous blogs I could award, and some I have awarded in the past, but these “memetastic” bloggers might well pass the award around to some of them!  I think that’s the meme idea.  To memefinity and beyond!
5 “Facts”:
1) Despite leaving the cupboard door open and the water slightly on, the upstairs bathroom water pipe burst in the recent sub-zero cold/thaw incident.
2) Making an Emily Dickinson collage bookmark, I once glued two of my fingers together at the first knuckle (fingernail polish remover helps, wash hands thoroughly).
3) A muffin wrapper and crumbs inexplicably appeared in the middle of the kitchen floor on Friday morning, partly eaten and vaguely smashed. 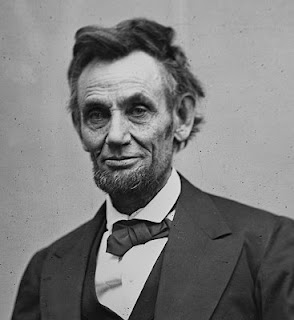 4) A  man appeared at my front door Saturday night, loudly yelling and vaguely smashed, and offering to paint the house (not this man).
5) This summer we will be re-painting our house a very faint lavender (with a fancy commercial name).
Vote for the fact you think is true!
Happy Lincoln’s Birthday and Valentine’s Day Weekend!
Posted by Kathleen at 6:38 AM

# 1 doubtful- you took adequate precautions, although truthfully, I don't know where you live, this could happen in Alaska.
# 2 I vote for this one, because one should be willing to undergo anything for Emily.
# 3 Do you have several wild dogs, children, or men living with you?
# 4 Interesting interconnection with # 5
# 5 Although this may be an 'authentic' intention, I wonder: Can a future 'fact' be true?

I'm voting for #3 as it seems magical and something out of Alice in Wonderlandish.

Ooooo, I'm hoping for #5! Would be an interesting addition to my view! I hope not #1, I doubt #2 (as I tried to glue my fingers together many times as a child. It doesn't work.), #3 is likely true (that sort of thing happens here a lot), and #4 is creepy.

I think it's number two - you would glue yourself together for Emily any day!

I'm a tad boggled by this honor! Thank you, and please don't paint your house lavender. Faint & fancy lavendar is better for bedroom walls than exteriors. Being vaguely smashed can cause finger gluing (and hot glue burns). I enjoyed reading about "meek" and also the review of "How to Succeed..."

Although I appreciate being named in your "meme" contest, I don't have five bloggers to pass it along to! This is because most everyone whose blog I follow is a) male, and b) very, very, very, very serious and professional and all the things that don't get down with posting bears and balloons and stars, more's the pity. Now I am sad.

Yes, Julie, I sensed there might be difficulty. You can have a rich memetastic inner life!

Is it okay to vote if I have insider information?

Time it out with gloating!