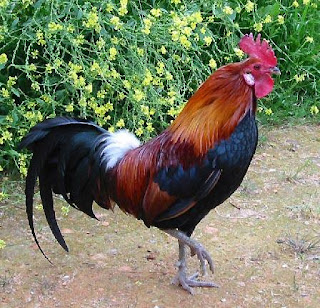 I was on the train this morning at the time I usually blog, coming home from the Oscar party in Chicago and finishing The Elegance of the Hedgehog, by Muriel Barbery.  Oh, how I love the mixed crankiness, tolerance, melancholy, and sweet joy of Renee Michel, and the yearning for meaning of Paloma Josse, and the acute intelligence of both these characters.  I recommend this book to anyone who doesn't mind pausing to philosophize or to examine grammar & usage before the story resumes.  It's worth the wait.

Madame Michel gets a bit cranky when the upper classes look down on the lower classes, and when the rich and powerful cannot even imagine that "ordinary little people" might have thoughts in their heads or a sensitivity to beauty. "Who has ever heard of a maid and a concierge making use of their afternoon break to ponder the cultural significance of interior decoration?"

When she continues in her meditation, I am sure I am one of the "ordinary little people," though firmly in the middle class in the USA.  "You would be surprised by what ordinary little people come out with.  They may prefer stories to theories, anecdotes to concepts, images to ideas--that doesn't stop them from philosophizing." I am an ordinary person, so, yes, I prefer stories, anecdotes, and images, and a poet, so I prefer the concrete to the abstract, but there is a place for all of it, and this book pursues that, too. 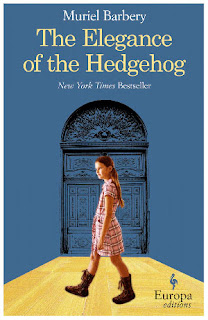 Another thing that makes Madame and me cranky is what is overly academic or wasted intellectualism.  She respects the great mind, of course, just as I respect the erudition and prose style of historian and academic Marilynne Robinson, but she is impatient with the usual course of the academic's career. Looking over a student's thesis, she sees it as "a perfect illustration of the way the university works: if you want to make a career, take a marginal, exotic text...that is relatively unexplored, abuse its literal meaning by ascribing to it an intention that the author himself had not been aware of (because, as we all know, the unknown in conceptual matters is far more powerful than any conscious design), distort that meaning to the point where it resembles an original thesis..., burn all your icons while you're at it [and here she lists the personal icons of the student writer], devote a year of your life to this unworthy little game [and here Madame Michel resumes the story and her own sharp humor, having been roused before her work day officially began by the rich girl student who treats her like a servant and whose father can afford a courier] at the expense of a collectivity whom you drag from their beds at seven in the morning, and send a courier to your research director."

Of course, living down to the expectations of the upper classes, Madame Michel also removes the paper from the unsealed couriered envelope and reads it, and later accepts a dress not her own from the drycleaner.  Ah, well, but we all have our flaws and the price is dearly paid. (Read the book!) 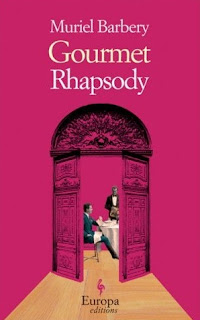 The cover of my book (see above) is blue, and I'm a little blue that I was bumped twice by people flinging their bags around and spilled coffee on it.  But at least I spilled coffee on my own and not the red-covered Gourmet Rhapsody, also by Muriel Barbery, same characters, same residential hotel, the first novel, happening before The Elegance of the Hedgehog, which I borrowed from the Oscar party hostess! So now you know what I'll be reading next!

And the elegance of the rooster comes from Nashville Scene, where you can visit the Red Rooster and the Blue Rooster restaurants....
Posted by Kathleen at 1:21 PM

Thanks for a great posting, Kathyleen. I'll put both of those books on my list.

I enjoyed your analytical synopsis of 'The Elegance of the Hedgehog'. You lost me, though, when you started referencing 'little people'. Why were you lQQking at me when you said that? (LOL).

I normally don't read fiction but because of your exellent review I already have it on hold at the library. Thanks 'Katherin'(snicker)

Just mentioning again that the book-on-cd of "Elegance..." is excellent.

Maybe I will recommend that version to my dad!

(And my copy of Elegance is actually my daughter's copy, as I gave it to her but borrowed it back to read it, so I may come up with another copy, not coffee-stained, at some point, if she wants to read it, reads it, loves it, and wants it forever.)