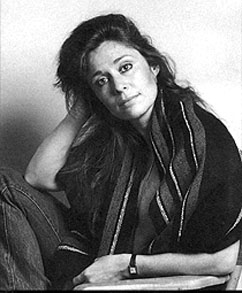 She wants us to have empathy for future generations we will never see; we must imagine them in order to feel for them, of course, so we will be exercising our imaginative as well as our empathic parts to do so. She told us that the part of the brain sparked by empathy is the same part sparked by information received at the tips of our fingers.  (Nancy, your reading on the brain, learning, and Braille connects to this, yes?) It's as if our fingertips are an insect's feelers or a cat's whiskers, alerting us to what's all around, helping us to function, warning us of danger. Graham wants us to put our fingertips out metaphorically into the future, with empathy, so we don't with our actions now make it horrendous for our descendants, if there are any, then.

Will we be satisfied with cute animal pictures on the Internet, she asked.  What about the real animals? Likewise, the Disneyfied world of animated animals.  What about their real lives on the real earth?  Yes, she was asking us to reconsider what we value and make sure we care for and appreciate what we have, so we don't ruin it.  An environmental call to "arms," asking us to embrace our world and our task, which will be to change our behavior.

Atlanta ran out of water, she said, and asked Mississippi for some. Mississippi said no. The federal government had to step in. We are already saying no to our fellow humans, in our own country, she was pointing out, and already using up our natural resources. We must change. 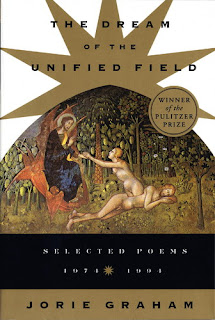 This is all summary and paraphrase, mixed with my own interpretation and examples. I hope she will publish the speech somewhere (the college paper?) and/or that essays of this ilk are out there for you to find and read, and her poems certainly are plentiful and available.  I have The Dream of the Unified Field, her Pulitzer Prize-winning Selected Poems, 1974-1994, which I will return to now, galvanized by this speech.

At the end of her speech, she read 5 poems, not her own (which will interest the Voice Alpha people!), about human empathy. I confess they made me cry, even though I had read them before, in that gasping, OMG-not-in-public kind of way. But it was OK: semi-dark auditorium, shared empathy, we were/are all in it together.

She read the poems from the page, in a voice like talking, as they were projected behind her on a large screen, so we could read them, too, white letters on a black background, stimulating two main parts of the brain! (And, I hope, the center of empathy.)

"You Can Have It" by Philip Levine
"Hook" by James Wright
and also
"Saint Judas" by James Wright  (Click on "A Blessing," too!)
"Those Winter Sundays" by Robert Hayden (click the audio!)
"The Panther" by Rainier Maria Rilke
Posted by Kathleen at 7:45 AM

I agree with Maureen and Gracias for sharing.

Saint Judas brought me to tears, sobbing not very quiet tears, fortunately in my own living room. Thanks for the post.

great post. our brain sparked by empathy. i do love that.

Jorie Graham is an amazing poet. I have admired her poetry for a long time. Thanks for this Kathleen. There is a growing gap between the world of clouds and coyotes and a world we have created, an approximate world, void of the wind and smells and taste. Our relationship to what is alive is also our connection to each other, I think. A river should bring us together, not separate us.